The Largest Fish Ever Caught in the Leech Lake Area

The Largest Fish Ever Caught in the Leech Lake Area

It’s no secret that Walker, MN, is one of the best fishing locations in the region. From Leech Lake itself, which offers over 160 square miles of world-class fishing, to the many surrounding lakes and rivers in Cass County, it’s truly an angler’s paradise.

Of course, there’s a reason we associate “fish stories” with bending the truth, tall tales, and outright whoppers. Ever have a buddy drag you along to what they swear is an amazing secret fishing spot, only to spend the whole day without so much as a nibble?

Point is: it’s one thing to claim that a lake is great for fishing. But you also better be able to prove it.

And that’s exactly why we’ve decided to research the largest fishes ever caught in the Leech Lake area — so you can find out for yourself just how great our fishing can be!

However, this record does have a new challenger: a whitefish caught near Lake of the Woods in April 2019. The photo below is of the recent catch, but it gives you a sense of the massive size of these record-holding fish. 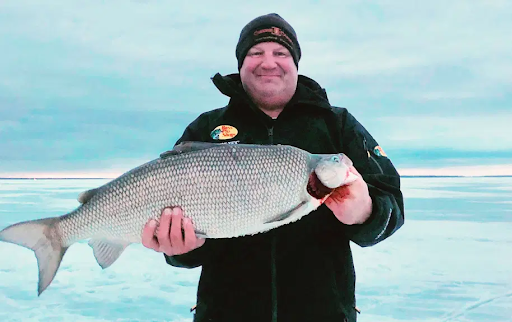 On average, pumpkinseed sunfish grow to about 4 inches long and weigh less than a pound. The record-breaking sunfish caught on Leech Lake came in at 10 inches long, weighing 1 pound 5 ounces! Like the whitefish, this sunfish has held the state record since 1999. It even rivals the current world record pumpkinseed sunfish, which weighed 1 pound 8 ounces.

While Leech Lake is the best-known fishing spot in the region, other nearby lakes provide plenty of opportunity for anglers, too!

The largest rock bass ever recorded in Minnesota was caught in Lake Winnibigoshish, just a few miles north of Leech Lake. The bass weighed in at a hefty 2 pounds — anyone familiar with rock bass knows they rarely weigh over a pound.

Another incredible fishing record belongs to Lake Winnibigoshish — this one has stood since 1957. The lucky angler reeled in a muskie weighing 54 pounds and measuring a length of 56 inches.

This record has been challenged a few times in recent years. The muskie in the photo below may have broken the record, but angler Kelsey Poshusta didn’t have a board long enough to measure it! 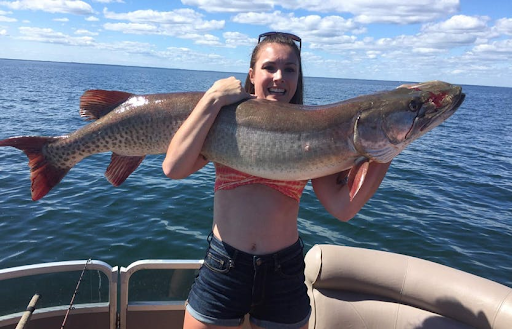 But hey — that just means there’s still an opportunity for you to visit the Leech Lake area and take a crack at the record yourself. With an abundance of conveniently located lakeside resorts, lodges, and cabins, you’ll have plenty of time to get out on the water. Also don’t forget to check out our Fishing Report posted weekly!